A rider whose horse bolted when a motorcyclist drove too close has won a case which solicitors say is a “step forward” for other riders.Sarah Roberts was hacking along a bridleway in Harlow Woods, Mansfield, Notts, on 10 November 2013, when the bike passed her, causing her horse — Sky — to bolt.Ms Roberts, who was 23 at the time, fell off the five-year-old cob x thoroughbred and broke her ankle.

The horse was physically uninjured, but Ms Roberts said he lost his confidence completely.

“Sky just didn’t know what to do with himself,” Ms Roberts told H&H.

“I think he must have stumbled — I don’t remember coming off.”

She was taken to hospital where X-rays confirmed she had broken her ankle. 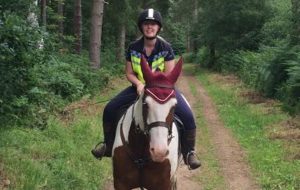 A claim was submitted to the Motor Insurers’ Bureau (MIB) — a body responsible for compensating the victims of accident caused by untraced or uninsured drivers — but was rejected.

The MIB said that as the motorbike was being ridden on a bridleway, it was not likely to be a road bike that would need insurance.

HorseSolicitor, Ms Roberts’ legal representatives, argued that under the Highways Act and Road Traffic Act, a bridleway is a public place or road.

According to the solicitors, a witness had seen the motorbike had L-plates, which showed it was a road bike.

These were what constitutes a vehicle and the circumstances for which it should be insured.

It was argued during the case, which finished on 29 June, that the judgement extends the MIB’s liability to victims of incidents involving all vehicles. This is provided they are being used in a manner consistent with their normal function and as a means of travel.

The case was accepted by the MIB.

Ms Roberts added: “I still can’t really believe it — I never thought anything would come of it.”

Final compensation figures have not yet been confirmed.

A spokesperson said: “This paves the way for future applicants to recover compensation for people whose injuries were caused by vehicles that would not fall under the pre-Vnuk definition of a vehicle.

“We still have some way to go before a definitive rule has been set but this is a step in the right direction.”